Coexist is the theme .celebrating diversity on the crossroads of the Great Silk Road has created favorable conditions to trade goods and at the same time exchange languages, customs and traditions, religions, ideas, and cultures of different nations for a long period in the present-day territory of Uzbekistan.

Uyghy .Uzbek dance has been formed mostly by the ritual gestures of different religions and imitation of animals for thousands of years. The majority is Islamic religion, 90 percent. Minority beliefs, such as Roman Catholicism, Judaism, Zoroastrianism, and others, are collectively practiced by approximately 1.9% of the population. Roman Catholicism is practiced mainly by the ethnic Polish community.

Judaism is practiced by the Bukharan Jew population, many of whom left the country after independence. Zoroastrianism is an indigenous religion practiced long before the introduction of Islam. Estimates suggest it has approximately 7,400 followers in Uzbekistan today.

My trip to the silk road and from my introduction to ancient asian costume in Abudhabi, UAE to the Silk Road ,my study of costume design and ancient silk thread embroidery in creating costume and wall hanging technique of the Ikat silk and dyes, an exploration of ancient culture and costume, inspired the creation of this painting. 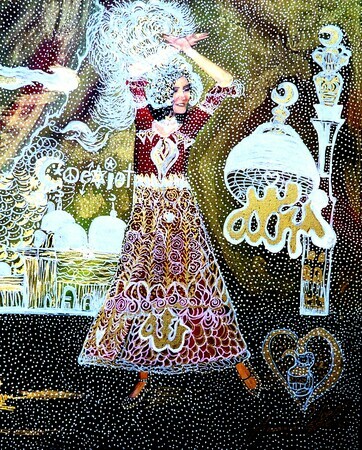 $500.00
Canadian Dollars
Inquire about this work